Mehmooda Duke of Moosa-Duke Solicitors, was awarded Solicitor of the Year by the Leicestershire Law Society.  At the awards ceremony, held at Athena on 27th April 2018, she was acknowledged for her work in Medical Negligence and her contribution to the legal community both locally and nationally.

Mehmooda set up Moosa-Duke Solicitors in 2003 and has used her unique skills to build a practice which is known as a leader in its field.  She has been described in “Chambers” as being “in a league of her own”.

Mehmooda has also gained recognition as an exceptional business woman – she won the Leicester Mercury Business Woman of the Year in September 2017.

Mehmooda is on the Executive Board of the Society of Clinical Injury Solicitors, a national organisation representing clinical negligence lawyers.   She was also the 2015-2016 President of Leicestershire Law Society. 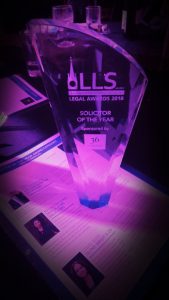